The British Horseracing Authority (BHA) is the independent governing and regulatory body for horseracing in Britain, with responsibilities that include race planning, discipline, licensing, equine welfare and liaison with the betting industry. The BHA needed the ability to monitor and analyse all of the racing and betting television channels for operational, integrity and public relations activities.

The installation of an IPTV system, using the same IP network used for email and other business applications, gives staff live and recorded access to all fixture coverage at their desktops and via LCD screens throughout the building. The system can easily be expanded for new applications and additional users, and improves BHA’s return on its network infrastructure and bandwidth investments. 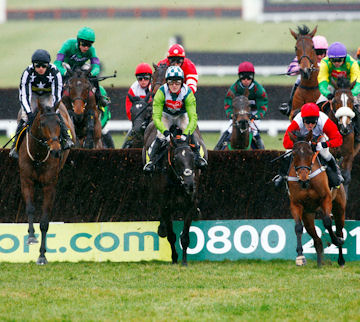 “One of the BHA’s primary objectives is to ensure that staff are able to efficiently access and monitor all of these new channels. The move to a new state-of-the-art facility gave us a clean slate for addressing the challenges of new media and offered the opportunity to build a system for the future that will enable the organisation to stay ahead of developments within the sport.”

The British Horseracing Authority (BHA) is the governing and regulatory body for horseracing in Britain. As an independent organisation employing around 300 staff, it works to ensure the continued health and successful development of the sport. Its remit is diverse, including race planning, discipline, licensing, equine welfare and liaison with the betting industry, which are handled by various teams within the organisation.

“Ultimately, the BHA is responsible for the integrity of British Horseracing and it is imperative that we keep up with the daily events occurring on or off any of the 60+ British Racecourses,” says Steven Shaw, ICT Manager at the British Horseracing Authority.

When the BHA moved to new premises in central London, which it also shares with partner associations The Jockey Club, the Racecourse Association, Racing Enterprises Limited and the Racehorse Owners Association, the organisation took the opportunity to upgrade the systems it uses in its day-to-day operations.

“One of the BHA’s primary objectives is to ensure that staff are able to efficiently access and monitor all of these new channels,” Shaw says. “The move to a new state-of-the-art facility gave us a clean slate for addressing the challenges of new media and offered the opportunity to build a system for the future that will enable the organisation to stay ahead of developments within the sport.“

“The technology we now have in place is both effective and cost efficient, delivering a lower total cost of ownership compared to the previous analogue based system. With the ability to deliver TV to desktop, the number of LCD screens required has dramatically reduced.”

After extensive research, the BHA chose integrator Focus 21 to install an Exterity IPTV solution, which uses the excess capacity of the headquarter’s IP network (LAN) to supply live TV and recorded video coverage of racing fixtures to staff. They can view media at their desktop PCs or on any of 32 LCD screens throughout the building, which are connected to the network via Exterity AvediaStream Media Players. Additional software clients or screens can easily be added without compromising picture quality.

Exterity AvediaStream DVB TVgateways and MPEG Encoders receive and multicast live free-to-air and encrypted TV channels over the network. Additional channels can easily be added due to AvediaStream’s modular design. Two AvediaServer platforms with multi-channel record and video on demand (VoD) modules enable later viewing of any fixture for analysis of possible irregularities or violations.

“This installation in the new BHA building was part of a compete refresh of the organisation’s AV technology,” says Jim Harwood, Director, Focus 21 Visual Communications. “In addition to the IPTV system, Focus 21 managed the full refit of meeting rooms, projectors and LCD screens. From day one of the building-wide project, Focus 21 worked from the consultants’ requirements to specify all equipment, prepare room system drawings and pre-test all software and systems at our workshop facilities before final installation and on-site testing. The Focus 21 project team ensured a strong working relationship between Focus 21, Exterity, the building contractor and the client throughout the project from first fix through to testing and commissioning.” 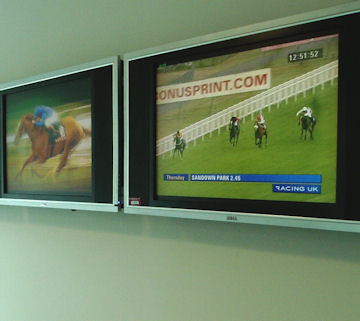 “With the sporting and content industries becoming ever more digital, we are seeing increasing numbers of organisations turning to IPTV solutions – which can run across an existing LAN – to deliver bespoke programming and interactive add-ons,”

BHA staff can now access all footage from mainstream television channels such as Channel 4, specialist sporting outlets such as Racing UK and betting channels such as Turf TV, both live and on demand. Previously, all footage was manually recorded and stored on VHS tapes, but now it is automatically recorded by the AvediaServer, guaranteeing that the footage will be available as and when requested.

“This digitised process eliminates the burden of tape management and allows the various teams involved with protecting the integrity of the sport to review an entire fixture or specific incidents much more quickly.

The Exterity IPTV system has given a real boost to the ability of the Integrity Services and Disciplinary teams to ensure reviewing of riding offences on course as well as comparing the in-running Racing against what is happening on the betting exchanges,” says Shaw.

The new system is also used by internal communications and PR teams to more effectively share announcements, news and views with staff, partner organisations, the media and other stakeholders.

Not only has the Exterity system made the organisation significantly more efficient in its monitoring efforts, but it has reduced the amount of hardware involved compared to the old system, greatly reducing ongoing support and maintenance costs.

“Technology is changing the face of racing in Britain,” says Shaw. “The BHA provides the sports regulation and integrity backbone and Exterity is helping us carry out our broad remit of support and regulation more efficiently than ever. The process of installing and integrating the technology was a simple process, the roll out proceeded without a hitch, and the final quality of the build and rack-mounting was excellent. Both Focus 21 and Exterity provided us with a faultless service throughout.”

“With the sporting and content industries becoming ever more digital, we are seeing increasing numbers of organisations turning to IPTV solutions – which can run across an existing LAN – to deliver bespoke programming and interactive add-ons,” says Colin Farquhar, CEO, Exterity. “The BHA is a great example of an organisation using such technology to stay ahead of its industry and future-proof its infrastructure for further technological advances. We’re delighted to have worked together on this project, which is making a tangible impact on one of Britain’s biggest and most popular sports.”