Philips Sport Vereniging (PSV) Eindhoven is one of the “big three” clubs of the Netherlands Eredivisie, the country’s leading football league. Established in 1913, PSV’s Philips Stadium holds a four-star rating by UEFA and has been used for Netherlands national team fixtures, UEFA Euro 2000 matches and the 2006 UEFA Cup final.

World-class sporting arenas need to have an audio-visual system in place that can deal with the evolving demands of the modern day visitor and staff. To ensure that it provided a world-class experience in the stands and throughout the stadium to the potential 35,000 fans it can accommodate, PSV Eindhoven chose to deploy an Exterity enterprise IP Video system throughout the venue. The system was designed to give visitors, fans, and club staff a seamless in-stadium experience. The deployment encompassed TV delivery to the Philips Stadium alongside training footage to the club and coaching staff.

As one of the Netherland’s best known and culturally significant sporting venues, football fans, corporate guests, players and staff expect PSV Eindhoven to be equipped with state-of-the-art technology. The modern day football fan wants access to the latest news, views, developments and classic action whenever they step foot into the stadium. A world-renowned venue, PSV Eindhoven understood that it needed to address this challenge to remain competitive off the pitch as well as on it.

“PSV Eindhoven is one of the biggest clubs in the Netherlands. To keep our place at the top table of European football, we simply must have world-class infrastructure and that includes our AV coverage of the action on the pitch,” says Roy Smits, ICT Manager at Philips Stadium. “As part of our ongoing desire to offer premium services to our fans, staff and international visitors, we have worked with Exterity, Intronics and AXIANS to deploy the first large-scale IP Video installation in a stadium in the Netherlands.”

“PSV Eindhoven is one of the biggest clubs in the Netherlands. To keep our place at the top table of European football, we simply must have world-class infrastructure and that includes our AV coverage of the action on the pitch.”

PSV Eindhoven issued a tender for its high-quality AV solution across the stadium, the training ground and coaching facilities. Exterity’s ability to create multiple branded portals alongside the ease of install was a crucial differentiator for the stadium, who chose the entire IP Video system proposition developed by Intronics and Exterity. Installation was completed by AXIANS.

The new deployment delivers TV content to 200 end points around the stadium via the existing IP network. Exterity AvediaStream Encoders are used to encode footage from the stadium’s internal media studio as well as live match footage from OB vans. In addition, Exterity AvediaStream Media Players are used to connect any TV screen to the existing IP network.

Control of the system relies on the Exterity AvediaServer, a powerful IP Video management system that also acts as the platform upon which customized channels can be created and tailored for delivery to different end points in the venue. Artio middleware has been utilized to customize the viewing experience in each skybox and business lounge around the venue, enabling greater personalisation of the corporate guests’ environment.

The Exterity AvediaServer also offers a Video on Demand (VoD) catalogue that enables assets to be played out via custom created channels, which can include graphics from the media room.

“The flexibility of the system was key to helping us modernize our video facilities across the stadium. It enables our staff to control each screen individually from one central point, ensuring that each piece of content is delivered to the right end point, enabling staff, visitors or business clientele to watch the action that is the most relevant to them. The ability to access and control all content centrally has streamlined our video capabilities, and the addition of the solution means that we can now cater for the modern day football fan.” 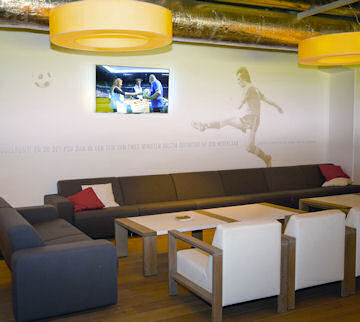 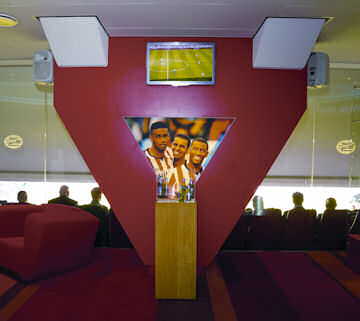 The large-scale project required the collaboration of multiple experts to ensure that all components of the system integrated efficiently and delivered a best in class experience to fans and staff alike. While IT specialist and system integrator AXIANS, and connectivity solutions developer and supplier Intronics ensured the effective realisation of the project, Mansveld installed the hardware. Doing so allowed AXIANS to run a perfect performance during a live unannounced test of the system with all encoders flat-out on bitrate.

“We are extremely proud to have been chosen by one of Europe’s leading clubs to modernize their video services for players, fans, visitors and more,” said Colin Farquhar, CEO at Exterity. “The deployment means that the famous Philips Stadium can now offer personalised content to different areas throughout the stadium, and even to the training facilities, enabling players and coaches to improve their skills and tactics. The scalability and robustness of the Exterity solutions also ensure that future deployments will be easily catered for without impacting the current deployment, enabling PSV Eindhoven to continue to excel amongst Europe’s footballing elite.”