Established in 1888 and part of the legendary Old Firm, Celtic Football Club is one of Scotland’s best known brands. Its home stadium, Celtic Park, is the biggest football stadium in Scotland, with a capacity of 60,832 and includes a series of hospitality and conferencing facilities. In 2007 the club also opened its brand new off-site training and educational facility, Lennoxtown.

With an ageing audio visual system in place throughout the Celtic Park venue and facing the pressures of an increasingly competitive sporting and entertainment marketplace, the decision was taken by venue management to install a new state-of-the-art building IPTV system. The system was designed to give fans, visitors and staff access to live and pre-recorded match footage as well as sports and news channels. 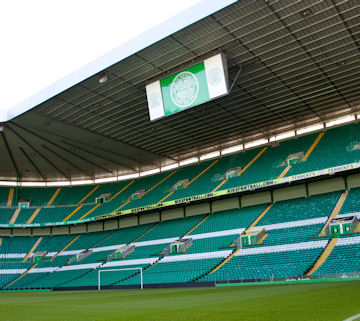 “Exterity technology has had a profound impact on how the club operates and we are really excited by the countless ways we can expand its use in the future to benefit both the club and its thousands of passionate fans. It’s also a bonus for us to see that the best technology for the job was provided by a local Scottish company.“

As one of the country’s best known sporting establishments, football fans, corporate guests, players and staff alike expect Celtic Football Club to be equipped with state-of-the-art technology, which enables access to all the sporting activity, news, views and developments whenever they want it, wherever they are in the stadium. A big ask certainly, but a challenge that all world-leading sporting establishments are looking to address as they strive to tackle competitive challenges both on and off the pitch.

“Ultimately, Celtic is a top-class team and when you’re competing in the game at this level, you absolutely need to have the support of a world-class venue and infrastructure,” says David Howell, IT Manager at Celtic Park. “As part of the ongoing review of Facilities and IT upgrade work, it became clear that our existing coaxial audio visual set-up was no longer adequate. Not only was the old analogue system reaching the end of its life, it was simply not fit for purpose given the sheer size of the stadium and huge amount of screens throughout the site. The stadium’s legacy system had struggled with the increase of screens over the years and the signal quality had become compromised, particularly over long distances. Whilst it just about did the job, it was by no means a future-proof system, not to mention difficult to manage on a day-to-day basis. Each screen had to be controlled and set individually and manually – a huge task when you’re looking at a venue that is capable of seating more than 60,000 fans.”

The Facilities team, headed by Stephen Donnelly, was tasked with finding a cost-effective alternative that was efficient and relatively easy to integrate into existing IT systems.

After extensive research, the team selected leading technology integrator, AVM, to install an Exterity IPTV solution, which operates over the excess capacity of the venue’s IP network (LAN) to distribute live and recorded match footage and other sporting coverage to the 60+ HD TV screens mounted throughout the stadium. 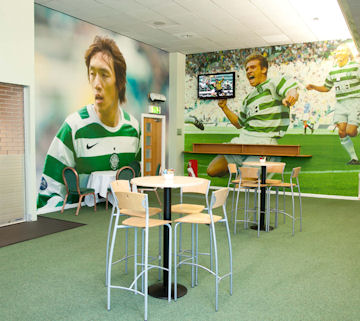 “Our Cisco IP infrastructure throughout the venue was already being used for voice and data, so it made sense to use that existing network to also stream TV and video content,” adds Howell. “Exterity technology means we can now cost-effectively deliver high-quality streams of sports channels, news channels and live feeds from cameras – something that would have traditionally required a costly and inflexible coaxial system to do the same job.”

In addition, content could now also be streamed beyond the Celtic Park stadium site itself. The 100 megabit connection between the main ground and the Lennoxtown training and educational facility means that live feeds from cameras could be streamed to the second site 20 kilometres away in real time and without any loss of picture quality; something that would simply have not been possible with an analogue set-up.